Not because I am fascinated by their abilities. I am simply fascinated at how they get away with it all in the first place. Now I do try to keep my mind open to the idea that all that surrounds us is not all that there is to see. And I will go one step further in accommodating the possibility that some people may be more sensitive in perceiving that which eludes the rest of us dweebs… sort of like an allergy to cat hair, or the ability to bend one’s thumb back to one’s wrist. A gift or an affliction. But in the everyday, I still don’t get how people constantly fall for half of this ooogly-boogly, happy horse-shit like backwoods suckers at a traveling freak show.

Let’s take John Edwards. No, not the one time presidential candidate… though I hear his Vegas magic act is pretty good. I am referring to the former ballroom dance instructor, turned psychic with the daytime television show for the shut-in set, who claims that ever since he was hit in the head as a small child, he can talk to dead people. Now if you have ever watched this show you will see this sensitive, metro-sexual type (hmmm, come think of it, I have never seen the two John Edwards in the same room together) with a Long Island accent walk out in front of an audience, who it would appear couldn’t get tickets to Oprah that day, and say something like “I’m hearing the name Peter.” On cue and without fail some hand wringing, Xanax addicted, frump in the crowd will respond with a, “Oh! Oh, my! Yes! Here… over here! Peter was my cleaning lady’s cousin’s wire-haired terrier twice removed! How did you know that?”

Now hold on. Let’s think about this for a minute. If you or I walked out in front of the same audience we could probably mention the name “Herbert” and you could be assured that someone in that audience had a Herbert in their lives somewhere. “Oh! Oh my! Yes! Here… over here! Herbert Hoover was once the President of the United States of America! And I’m an American! How did you know that?”

So once Edwards has some poor sap in his cross-hairs he proceeds to roll his eyes around in his head like the wheels in a slot machine, press his temples dramatically and work the poor, bereaved moron like a five dollar consort at a plumber’s convention with leading statements like “Peter is pointing at a car” or “He’s trying to say something that begins with the letter “R.” At this point the hysterical sucker will start to make all sorts of associations like “Oh! Yes! Peter drove a Rambler!” or “Peter worked as a Re-po man,” or “Peter was a robot!” By this point the audience is enraptured, tearfully cooing “Ooooh’s” and “Ahhhh’s” as though they are watching star shells exploding in the sky. Then Edwards goes in for the kill, saying something like “Peter wants me to tell you that his death wasn’t painful, he’s happy where he is and he just wanted to say that he loves you, and that he’s sorry he dragged his sphincter across  your rug.” At this point the sad clown in the audience keels over into the aisle in an apoplectic fit of reverie, believing dear, sweet, deader-than-disco Peter has reached out to her from beyond the grave. And for this sort of dog and pony show, Mr. Edwards apparently rakes in some mighty serious cake. Holy hell on a cracker… what a sweet racket!

In that I have been trying to figure out what I want to be when I grow up for the past 50 (cough… or so) years, I imagined there would be no harm in my trying my own hand in what appears to be a pretty great business. I spew oogly, boogly…. and people pay me. Nothing wrong there! And not too different than what I do now come to think of it! So in preparation for my transition from an obscure rock and roll has-been into a world-renowned psychic, to add credibility this morning I went into the garage and hit myself repeatedly in the head with a shovel. Yes, it did hurt. But I believe that one must suffer for one’s craft and viewed it as simply the paying of my dues… as all great artists must certainly do. Having accomplished the head injury portion of my “So You Want To Be A Psychic And Get Paid Like John Edwards.” – checklist, I showered, shaved, dug out my suede sports jacket, slipped into a pair of Cole Hahn loafers, doused myself with cologne and imagined myself preparing to greet my audience before I amaze and baffle them with my own brand of hoodoo. I felt a renewed sense of purpose and excitement at the prospect of fulfilling my dream of becoming a conduit through which those who have departed from this world may speak, and thereby provide a sense of comfort to their loved one’s left behind… and who would then of course gratefully line my pockets with their hard earned cash-o-la-la-la.  I proceeded to sit quietly on my deck, slowing my heart rate, calming my mind while one by one I pushed all temporal thoughts from my mind in my attempt to tune into the great beyond and open the potential Pandora’s box of the eternal… and fell dead asleep in about three minutes. Vodka and a few Valium can’t hold a candle to tuning into the spirit world!

After I had wiped the drool from the side of my mouth, I elected to forego another round of smacking myself in the head with a shovel having determined that I had indeed paid my dues in full earlier. Instead I decided to practice rolling my eyes around in my head and pressing my fingers to my temples in order to refine my posture and determine my best camera angles for when I eventually would take center stage. And it was then that the visions came to me. The here and now seemed to melt away, replaced by vivid images of the future. A panoply from beyond. My third eye had apparently locked onto an anomaly in the fabric of the space-time continuum that allowed me to foresee events in the near and distant future. Yowza! Huzzah! Ka-cha-cha-cha-ching!!!

I scribbled them down on the back of a pack of Camels, so forgive any inconsistencies in logic, principles, reason, coherence, sanity or grammar. We professional and bona fied psychics simply calls ’em as we sees ’em. And the future as it was revealed to me by my Indian spirit guide, Chief Kawabungabingabunga is both terrifying and spectacular and this is just some of what I saw…

In the very near future, scientists will discover that copious amounts of cigarettes, alcohol and gratuitous sex will serve to lengthen the human life cycle by an average of 500 years. In turn, they will discover that it was the act of using forks and spoons that was killing us prematurely. However the benefit of this discovery will be rendered moot as most people will become completely nauseated at the idea of having sex with anyone that old, though eating with one’s hands will become very fashionable with the trendy set.

But, by the year 2019 people will rarely if ever leave their homes any longer as political correctness lawsuits will have established significant precedence wherein people who appear to be alive could be considered offensive to those who are dead.  As well, all public parking lots will be required to designate special parking areas for all customers who are in fact deceased. The deceased will be required to hang a special tag on their rear view mirror, depicting a blue smiley face with X’s for eyes in order to legally make use of these spaces. Eventually though, as necessity is indeed the mother of adaptation, as a counter measure to avoid having to pay out hefty lawsuit settlements, people will take to wearing chicken suits in public, thus declaring themselves to be poultry and thereby not subject to any litigation involving humans.

In the year 2026 Barbara Streisand will embark on her final, final, ” I really fucking mean it this time” farewell tour. She will share the bill with KISS. Ticket sales will be sketchy.

In 2042 Nathan Lane will reprise his role (for the 37th time) as Max Bialystock in The Producers starring opposite a broom.  No one will notice.

In 2061 Rocky 39 “The Putrification!” will be released to mixed reviews.

In the year 2085, genetic engineers will be able to combine the DNA of plants with humans, thereby creating men who are shrubbery. Women everywhere will rejoice, as they will always know where men are since men will no longer be able to run about, and they will remain “upright” regardless of how much of beer they drink.

Finally,(and after an inestimable amount of lawsuits) in the year 2116 science advancements will allow for the dead to be brought back to life.  However this development will come under intense fire from the public, as it will allow for the return of people like Hitler, Stalin and Benny Hill.  The final tipping point will be the public complaints about the dead taking up all of the good parking spaces.  This will force the government to limit reanimation and create a lottery wherein the dead can buy tickets to win a chance to come back to life. The proceeds will be used to underwrite public education.

By the year 2117, the US public school system will declare bankruptcy.

Microsoft, having assumed the management of the United States in 2187 after the Second Dark Ages (a period so named as a result of a descendant of the Bush family being elected to the presidency via a contest very similar to American Idol), will release it’s new operating system entitled “WallEye 37.0, ” which unfortunately due to a few minor glitches will wreak havoc on end user systems, causing massive worldwide power outages, transportation failures and cause frogs to rain from the sky in Toledo (which of course will go largely unnoticed).

There were more, but unfortunately I neglected to take the other pack of Camels out of the pocket of my trousers before they were tossed into the wash (hey, this psychic thing is tricky sometimes).  I am writing this to you as I await the final rinse cycle to complete and hopefully more windows on the future will be available after the final spin.  Till then, I remain yours in the light of the great cosmic light of the revered and most holy Baba Rum Raisin.  May his blessed spittle rain down upon you…. A-bloogah,bloogha,bloogha!

Thanks for stopping by 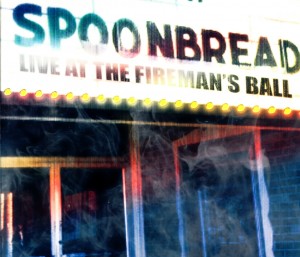 8/3/13 – Finally, the long wait is over.  Fully remixed and re-mastered, SpoonBread’s live album “Live At The Fireman’s Ball” is set for release on September 1st, 2013.  Of course the tracks have been available on this site and others for streaming, but not for download.  The album is the live recording of Doug and the band’s rare appearance at The Oneonta Theatre on May 12th, 2012 and features their special brand of roaring funk and slamming rock & roll that left the crowd exhausted and screaming for more.  A CD version will be available Sept 1st on SpoonBreadMusic.com, here of course… iTunes and Amazon.com.

Stay tuned!  The band as ever is grateful for your patience and support.   Look for SpoonBread to resume live dates in 2014.