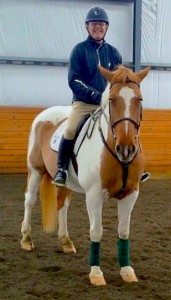 As you may or may not know, or could for that matter care less, I have found a new focus in line with my ongoing mid-life crisis. Actually I don’t see how it can be considered a mid-life crisis as I have always strictly maintained the perspective of a 12 year old in all things, but regardless… the point is I have decided to get back on a horse.

While some men of a certain age buy a red Porsche or a motorcycle, some slather themselves with Rogain or snort Viagara and take up snowboarding, or even some go so far as to trade in long suffering wives for newer models, convincing themselves that it’s for love and love alone, while Trophy Wife #Whatever plugs an industrial grade vacuum cleaner into their wallet… a man’s brooding sense of  panic over his inevitable and progressive decline can take many forms.

Understand that this is not an out-of-the-blue, new found passion as I formerly competed in a variety of equitation events when I was much younger… much, much younger. But that of course was way back when horses were steam powered and a bear claw would buy you a spot by the fire and hot bowl of mud.   Much in equitation, particularly jumping, has changed since then … the primary being of course, my body.

First thing I have learned is that I am no longer made of rubber. I can no longer bounce off of things, like the ground for example, with the same level of grace if not outright glamour that I once possessed. I can now actually, really hurt myself. I could also die if push came to shove, which of course would ironically and quite pathetically undermine the whole point of this latest manifestation of my fantasy battle against time. So a certain amount of caution is in order where there previously was none.

This change of circumstance and condition was made clear to me upon my first visit to my local riding academy, where once the truly wonderful staff got over their initial shock at the idea of me being there in the first place, took great pains to keep me out of harm’s way. For example… by not letting me get anywhere near a horse. Bloody brilliant! I loved this place immediately! And this very well intentioned safety protocol worked quite well on my first day as I sat in the tack room, far from danger, staring at the walls of assorted saddelry as my brand spanking new breeches, boots and helmet glowed in their recency.  Eventually however I began to sense a bit of a lack of accomplishment and so I got a little pushy (as I am known to do, just ask anyone who says “no” to me… it rarely goes well, regrettably) as to how long I would be required to drink well meaning coffee and admire the inspiring framed photos of other riders, captured in the midst of heroic leaps… and I asked when I might be able to actually meet a horse. It was then that I was introduced to “Mabel,” a 24 year-old paint, dray mare who was also lovingly referred to around the stables as “Princess Comatose.”

It was love at first sight. At 16 hands, she was also as wide as a bloody barn, but I was fortunate in that she appeared to have no withers whatsoever due to her basically being an oil tank with legs. This was a real plus in light of my anatomical difference from the female riders in the barn and thus outfitted with the proper Crosby saddle (favored by men, I am told) I felt no particular need to spend all of my time riding constantly in a half seat.  We were off to a great start!

My “romance” with Mabel was a whirlwind. I soon found myself thoroughly charmed at her coquettish habit of backing up from the mounting block just as I prepared to insert my foot into the stirrup. Over and over, and over again we would play this little game. Back and forth, back and forth. What joy!  Such laughs!  Her uncanny ability to drift directly towards a random cavaletti lying to the side of my path the split microsecond I’d position myself to begin a trot… I found this utterly charming. And her adorable way of spooking and completely bugging out at alarming distractions… such as say dirt, or sunshine… Tellement Amusant!   After a week or so of this, I was ready to shoot her and then myself. I began to see a similarity between my riding this rolling refrigerator and the poor sap who was being cleaned out by the blonde Marie Besnard with implants that he’d left his wife for. Guys are dumb. Mable knew this.

Regardless, I was determined. I was good at this… albeit years ago. I was told back then that I showed promise. “I am not dead yet – I can do this – I don’t like red cars,” I told myself. So I focused in on the training patiently dolled out by my tortured, yet saintly instructor. And lo and behold, once I had figured out that I needed to use the other outside rein (in other words, tug with the other left hand, idiot), and that my legs should probably not be sticking out in front of me as though I were planted in a Barcalounger doing a History Channel binge, I began indeed to sense some progress.

But it wasn’t just a ‘sense’ of achievement.  I was told I was making progress. While encouraged by my instructor and praised or chided accordingly, I was flat-out told I was making progress… by Mable, herself.  She began to respond to my commands.  Of course she still loved our little “Okay. Get on me… come on. I won’t back up again. I promise!  No, I really mean it this time. I love you.  I’m not lying.  BWAHAHAHA!” game, but she began to do what can only be described as placing her trust in me.  She began to offer me respect.  A respect I had to earn, but given with trust when due.  ‘Click,’ we turn. ‘Click,’ we trot. ‘Click‘… we focus and fly.

I am one month into this. I am having the time of my life. I have no delusions of grandeur only in that I consider myself so damned fortunate to not be that guy at the gas pump with the bad hairpiece and the red Carrera. I will keep you apprised.

I Don’t Need A List To Remind Me To Breathe… Yet. More on my Excellent Equestrian Adventure….
Scroll to top