Touch was never quite a “New York  band.”  Even though for the most part we all lived in the city, built and rehearsed our act in a rat-infested loft next door to the Mid-Town South Precinct on West 35th Street (up the block from Reverend Sun Myung Moon’s zombie hostel in the old New Yorker Hotel) and my entire social life at the time revolved around places like CB’s or Max’s, Trax, Privates… or The Odessa and Wo Hop for 4AM club-fogged sustenance, still Touch was never thought of as a New York thing.  Comprised of Mark Mangold (keys and vocals), Craig Brooks (guitar & vocals), Glenn Kithcart (drums) and myself… and built from the ashes of the Columbia Records act “American Tears,” Touch for a variety of reasons was always assumed to be a UK/Euro, or an otherwise “elsewhere” band.  Likely because the vast majority of our fan base and successes always seemed to be any place other than our home, we were the picture-perfect example of the line “Well, we’re really big in Europe, man…”   It was also likely because we never did much in the way of live shows in or around NYC prior to our signing with Atco/Atlantic Records in 1979.  It was always just assumed by most of the New York scene that we were Brits, or perhaps Swedes.

Touch, while ridiculously talented (if I do say so myself), was for the most part a one, perhaps two hit wonder (in the States anyway…) that eventually drifted apart after the recording of our second album.  The individual members thereafter moving on to work with a host of other acts and endeavors.  However about two years ago (40 some odd years since the last time we’d worked together), a couple of record labels contacted us, lobbying for a reunion album.  It was explained to us that we apparently held the unique status of being one of the “OG” bands wherein all of the original members were still alive and sentient, and they were willing to bet that a new album would be well received.

“None of you are dead yet.  It would be a great idea to do an album before something happens.”  While that pitch sounded like a line out of a bad Mafia movie, it still kind of made sense.

So, after much cajoling (and the check didn’t hurt), we plowed through COVID and cobbled together what we anticipated to be a tidy little “thank you,” to the fans that never forgot us. Touch – “Tomorrow Never Comes” was supposed to be a quiet period at the end of the sentence for a band that never quite broke through that often arbitrary ceiling into super-stardom, but also never seemed to simply go away.

What we didn’t anticipate however was the album’s success.  Though of course limited to our now somewhat archaic musical niche, within our milieu its release made noise.  We were almost embarrassed by the critic’s consistent approval.  Calling ‘Tomorrow Never Comes’ “…come-back album of the year” and “…a triumphant return,” giving us ratings of tens out of tens and all sorts of thumbs going everywhere.  All these years later… go figure.   The noise now is all about us possibly touring.  We’ll see… we’re old… we’ll see.

That said though, this blog is ultimately about New York and not necessarily how fabulous Touch is, or was… – Though PLEASE DO consider adding us to your favorite streaming app playlist as my house could really use some new siding! 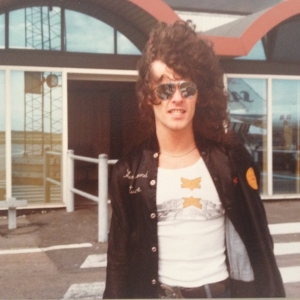 The author as a young delinquent.

I consider myself a grateful native New Yorker.  I attribute a good chunk of my survival in this loopy business to being both that and a musician during that once in a century time when the city’s creative stew combined with the insanity that was late 1970’s/early 1980’s New York boiled over. I’m thankful for how New York took what I had out of the gate, and honed it.  Street smarts, instinct, edge, knowing how to hustle (how to spot one… and how not to be taken by one) and to have been exposed to all that was excellence.  The best in art, music, performance and just an overall “only in New York” scene… these were, and remain New York’s elementary gifts.  And while it may no longer be quite “my” New York (I occasionally get lost in mid-town now with all of the old landmark buildings gone), it still remains, deep down… always New York.

Thousands have eulogized about New York’s gilded, grotesque compound of capricious cruelty and simultaneous capacity to make anyone’s dreams come true.  To paraphrase Richard Hell, “New York is the only place where if you screw up, you can simply reinvent yourself over and over until you get it right.”  It rewards tenacity, punishes stupidity, raises or crushes the puritan alongside the villain … pretty much giving everyone the same shot at ascendency, or self-immolation, or perhaps both.  An asphalt field of dreams, though not a playground for the delusional.  New York doesn’t have the time to waste on false hopes.  “Fake it till you make it” doesn’t fly here.  Not for long anyway.

The most common mistake I’ve witnessed many wide-eyed pilgrims to New York make when coming here is thinking that “winning” is the end game.  The truth is though that the only thing resembling “winning” here is being allowed to play the game at all.  Yes, you can become wealthy and famous, perhaps both, or one or the other.  Very much so.  There is no doubt that the trajectories exist for aspirants to achieve Master of The Universe status in any number of fields of endeavor.  But soon (and the sooner the better) you begin to realize that no matter how much you earn, or how famous or powerful you get to be, there is always… always… someone richer, more famous, more talented, more beautiful and more powerful…. than you.  And if not on the immediate horizon, it’s a sure bet that they will be getting off the bus very shortly.  At that point, you should recognize that it’s the game itself that counts here.  It’s not about the finish line.  Because ultimately, there never is one.

In New York, you both achieve and fail. Equally ennobling and humbling, you glory in triumphs and writhe in defeats. You work and play harder, love more deeply, despise more venomously, empathize more profoundly and generally live more intensely than you ever could elsewhere.  Anywhere.  Roller-skating around the dining room on your yacht is not the end game (though it’s certainly very nice if you do).  Being allowed into the game in the first place, and holding your seat at the table… that is the payoff.  And to me, that’s enough.  More than enough.

Some random examples (in no particular order): I performed in 19 consecutive sold out shows in 10 days at Radio City Music Hall. I never won a Grammy, though I went to the altar twice.  I got torched by the Village Voice for being pretentiously camp  (whatever that means).  I shared stages and worked in studios with some of the most legendary and jaw dropping talent on the planet.  I was loosely used as fodder for a character in a book about an iconic novelist’s sex life.  I found myself in the offices of, and was invited to work with some of the most powerful people in the business of entertainment.  I was a bartender at the already by then time-worn Hotel Taft in Times Square, where I kept a baseball bat under the bar and used to let beat cops (some who worked two extra moonlighting jobs to support their families) “rest” without being disturbed in the back room. I built a company that has survived and thrived in an industry that is legendary in its ruthlessness.  I was launched out on tours that performed in just about every city on practically every continent.  I got thrown out of the China Club one night because I dissed the men’s room attendant’s shitty taste in music.  I made the cover of NY Daily News Parade Magazine.  I thoroughly humiliated myself by once mistaking Bette Midler for the office manager of a recording studio (my eyesight has always sucked).  I got my first record deal on my birthday, with the ensuing album coming out on my next (the party was legendary… even the cops hung around).  About three years or so thereafter I got divorced, went bankrupt and was audited for two years’ worth of tax returns… all of that last bit within the span of a couple of months.

Where else can you live like that?  And how could anyone ever settle for anything less?  Now it seems I’ve made full circle.  Only in New York… only in New York